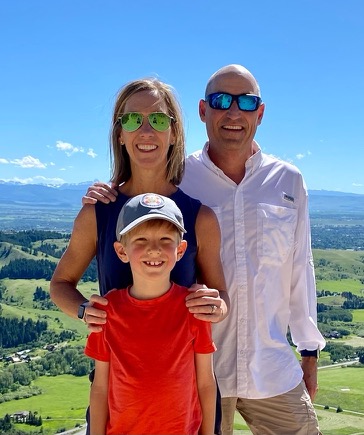 David M. Kenyon is the President and CEO of Coverwrap Communications LLC. David started his career in the magazine ad business in the 1980’s while working for Time Inc.’s Targeted Media Inc. (TMI) as a straight commission sales rep. He spent several years working as an independent sales contractor for Time Inc. in New York City selling outsert ads and insert ads for Fortune, Time, Sports Illustrated, Life, Money, Entertainment Weekly, and People magazines. David spearheaded the development of the Mid-Atlantic region for TMI as well as specific account assignments and ad agency assignments in Manhattan.

David went on to work for Time Inc.’s rival Forbes Inc. in the 1990’s selling cover ads for Forbes, Forbes Asia, Forbes EMEA and American Heritage. His responsibilities included heading up the Chicago Market / Midwest Region where he tripled sales revenue while employed at Forbes. During his years at Forbes, David met with Forbes contract printers, bindery teams, union executives and audience development firms to foster and strengthen relationships with Forbes Inc., and its cover ad program. It also gave David a much broader understanding of  the publishing industry.  David still works with many of these manufacturers and print partners today.

David approached Forbes with the idea of creating an independent firm to outsource the ad sales side of the Forbes Target Audience Plan.  Forbes management was all in favor of the initial concept and cost savings. David departed Forbes and created a new business aligning leading publishers, including Forbes, and outsourcing their cover ad sales, printing, audience development, and marketing to the new firm.

In late 1996, David Kenyon launched his new company (Kenyon & Co.) which would soon be rebranded Coverwrap Communications.  He flew to New York to meet with Hearst Magazines, Meigher Communications and other publishers to create a direct competitor to Time Inc.’s Targeted Media. He also reached out to Targeted Media’s founder and renowned magazine “insert” and “outsert” promoter, E. William Kenyon (Bill).  Bill was interested but had a two-year noncompete with TimeWarner, and could not participate.  David continued to build his new company while working with Forbes and other leading publishers.  18 months later, Bill reached out to David in 1998, after Time Inc’s management team agreed to release Bill early from his obligations. Bill was now interested. David agreed to a significant ownership stake in a new but different venture, CSI/PAC. David and Bill worked with each other for several years but parted ways.

In 2002 David Kenyon developed and executed the first ever 70,000+ office POC ad program for a leading pharmaceutical company. The contracted media and subsequent bookings totaled $2MM+. This was a first in the POC space.

In 2003 David Kenyon developed and executed the first ever 8000 General Counsel ad program for a leading law firm.  The contracted media and subsequent bookings totaled $3MM+. This was a first in 2003 for the legal vertical.

In 2004 David Kenyon developed and executed the first ever 6000 CIO ad program for a leading network server provider.  The contracted media and subsequent bookings totaled $2MM+. This was a first in 2004 for any network company provider.

In 2010 David Kenyon developed a new booklet style cover ad which enables advertisers to display 6 to 10 pages of advertising on the front cover of a magazine in a page turning format. David works very closely with his domestic and international manufacturing teams to ensure the most desirable formats are engineered and to the strictest standards and are always available.

In 2012 David Kenyon developed, executed and launched the first Us Weekly cover ad program to compete directly with People magazine’s successful franchise in POC. To date Coverwrap Communications has placed millions of dollars in media bookings with its publishing partner a360 Media.

In 2013 David launched the first ever Forbes China cover ad for a leading US technology firm.  Total bookings for the multi-year global campaign exceeded $2MM. David also expanded to Forbes Asia, Fortune China and other regional magazines in the APAC market.

In 2014 David launched a global campaign for a leading US networking powerhouse.  The campaign regions included APAC, EMEA, NA, and LATAM. The ad messaging was produced in 4 different languages and targeted over 10,000 global executives.  This was a first for B2B cover wrap ad platforms.

In 2019 David Kenyon developed and launched Newsweek Health magazine in 36 condition specific editions for patients in the point of care environment. This new platform is exclusive to Coverwrap Communications and provides a customized way for leading pharma marketers to engage patients in waiting rooms and provides a take home component to enhance the patient journey.  Condition guide editions range from Diabetes, Cancer Treatments and HEP-C to Cardiovascular Health and Plaque Psoriasis. These guides are now available in thousands of waiting rooms nationwide exclusively from Coverwrap Communications.

In early 2020, in the midst of the Covid-19 pandemic outbreak, David launched the first touchless reading digital newsstand with global publishing powerhouse Hearst Magazines.  Within a short period of time Coverwrap Communications ramped up thousands of office locations with QR code touchless reading displays in waiting rooms and exam rooms.

In 2020, David Kenyon developed and executed touchless take home reading for all of Coverwrap Communications print platforms.  David was quick to react to Covid-19 and the misleading guidance that “touch” was the cause of Covid transmission.  NIH and CDC have since walked back this error and have focused the attention on person-to-person spread via aerosols. Magazine reading, and condition guide reading, are both safe in the point of care.  Good hand hygiene has always been recommended.

David Kenyon has always been driven to work, build and create exceptional business ventures.  His entrepreneurial spirit and strong work ethic started at a very young age. It was passed to him from his father and from his grandfather who were both successful entrepreneurs.  David worked full-time at a leading Michigan law firm through his undergraduate years.  He attended evening classes at the University of Michigan where he pursued a B.A. in English.  This enabled David to pay for 90% of his undergraduate education but this came at a cost.  With mounting school debt, limited time and an eagerness to work, David left prior to graduating, to launch his first start-up.

When not in the office, David is an avid mountain biker, runner, hiker and skier.  He has completed 9 marathons in North America and Europe.  He desires to run one more with his family if his knees can make it.  He enjoys devoting most of his free-time to his family and local community.  David, along with his wife and son, reside in Vero Beach, Florida.

Unique programs deserve a unique approach and the award-winning Coverwrap Communication Project Teams are unparalleled in the industry.